This morning, we are at Mahajan Imaging for Tyson’s brain spect scan. This is a test that basically shows which areas of the brain are active and which are not. In Lyme patients, the bacteria can cause a lack of oxygen in the brain and by doing this test, you can track the progression of the disease.

A little flashback: Dr. Shroff ordered this test for Tyson in February when we first arrived. The results from that test were gruesome. They showed that roughly 90% of his brain wasn’t receiving enough oxygen and some parts were completely devoid of oxygen. The parts most affected were the areas that control his balance, memory, and emotion. When Dr. Shroff explained the results to us, what she said was pretty remarkable. She said “Don’t worry about this. Let my stem cells do their work and we will re-do the test again before you leave in April. Get out and enjoy India!”. I’ll never forget the awful feeling we had as we went back up to our room. We had traveled 7,800 miles from home where we had heard enough horrible news from doctors…we couldn’t take anymore.

So we went to our room and didn’t say too much to each other except whatever encouraging things we could come up with… The next several weeks went by and we consumed ourselves with his physio and occupational therapy sessions, trips to the markets, and dinners with friends at the Imperial Hotel (don’t worry, I’ll circle back and fill you in on all of this!). Days before our departure from the hospital, we came back to do our spect scan again. Now, we knew even before taking the test that Tyson had improved considerably but we weren’t quite prepared for what we were about to see. 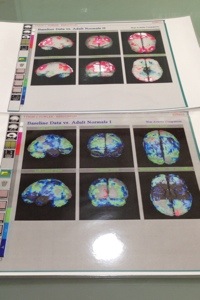 So, the bottom scan that you see is the initial scan from February. I don’t know if you can tell in the picture, but there’s a scale on the left hand side. The top white, red, and pink are the optimal colors…showing excellent brain function and oxygen levels..grey is neutral and the blues and greens are very poor leading down to the black which signifies the lowest oxygen flow/brain function. You can see how terrible the first can was.

The top scan from April is absolutely incredible. What was damaged by the Lyme is now healed by the stem cells. It’s sort of like a ‘clean slate’ for him. Most of the brain is grey and he even has parts that are white and pink and red! The black is nearly gone. Dr. Shroff was astounded by these results and told us that even the doctor who ran the test had to re-do it 2 or 3 times because she couldn’t believe it was the same patient!! Dr. Shroff told Tyson to read, eat well, and exercise to train these new cells. It’s important for him to sort of think of himself as an athlete in training. Tyson was an incredible athlete his entire life, so this was an easy prescription for him to follow 🙂

So now, with the start of our second visit, she’s ordered it again because like I mentioned, with a quickly progressing disease like Lyme, it’s a great measure to track progress.

We should see our results soon and we will do the test again in August before we head back home.

That’s all for now. We are so happy to be back here 🙂 More updates soon!