We arrived safely last night (Tuesday) around 7:30 pm. We made it through customs without incident 😄…the inspector reminded us that this was our third and final visit allowed on this visa (I will get to work on renewing them in the coming weeks). We then collected our luggage and headed outside where we met our “concierge” from NuTech who was holding a sign that read “Tyson Fowler”. We piled our luggage into the van and with the help of a few men, loaded Tyson in his wheelchair up the ramp and into the van as well. In a matter of 15-20 minutes, we arrived at the hospital and right away were greeted by several Ward Boys who helped us get Tyson out of the van and bring our luggage to our room.

Here is a shot of our view as we exit the airport:

Here is a shot of Tyson with his best game face: 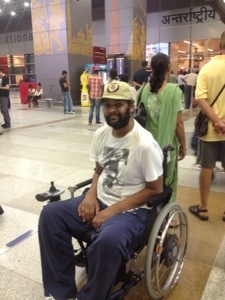 And finally, here’s a pic of where we waited for the van to pull up. You can see our luggage and Tyson’s leg braces in the left corner. Not terribly exciting, but at least it’s some sort of visual to share:

We got to our room (which is the same room we had in July…so it sort of makes it feel even more like a 2nd home) and the Sisters, or nurses, greeted us with smiles and hugs and told us to “take rest” and we would begin treatment in the morning. Tyson put on some music..Bob Marley and a little Steel Pulse while I spent about an hour unpacking and “merchandising” the room and bathroom (my RL family can appreciate that 😉 ). We forced ourselves to go to bed around 10:30 pm to get a handle on the inevitable jet lag.

We woke by 9 and had breakfast. Around 10, Dr. Shroff and her team came to our room to welcome us and see how Tyson was feeling since we last met in August. Tyson showed her how his biceps were flexing more and how his core strength had improved. He told her that his hands were still quite weak and she immediately made plans to address this issue. She was thrilled to hear that he had rolled over and you could see her eagerness to get things started.

We then headed downstairs for our PT and OT evals. His OT eval went well–did some exercises and discussed the plan for the next 6 weeks. The PT eval started out with his therapist, Dipin, measuring his muscles and comparing to the measurements from August. Dipin shared with us right away that Tyson had gained a centimeter in BOTH quads and about an INCH in BOTH calves!! Additionally, both forearms have added bulk. This is outstanding news especially since it’s only been 6 weeks since his last measurements were taken. Dr. Shroff confirmed our hunch that the larger muscle groups would come back faster than the smaller ones…again, similarly to the way a baby develops.

The rest of the day was spent relaxing and resuming the stem cell injections. Side note: Tyson won’t need a new Brain Spect scan at the start of this trip since we just had one 6 wks ago. He will have one at the end of October before we leave.

Right now it is close to noon on Thursday. Tyson is scheduled for his first procedure tomorrow afternoon which will be a wrist block and an epidural. I have a really good feeling about the next 6 weeks…