Another long overdue update…but I have a really good excuse! Tyson, Calvin and I welcomed our little Abren Marley Fowler on the first day of summer, June 21st. Abren weighed 8lbs 6oz and was 21 1/2″ long. Thanks to our wonderful friends, Gia, Katherine, and Vanessa and our awesome neighbor who helped get Tyson into the car, Tyson and I were able to be together for the entire labor and delivery. The whole experience was really wonderful.

Because I had gone into labor late in the evening, around 11:00, our doctor had the hospital staff bring another bed into the delivery room for Tyson. We actually didn’t sleep while we waited because everything had been moving along so quickly and our doctor suspected I would be able to have the baby within a few hours which would have allowed us to send Tyson back home for some rest. Abren, however, had a different plan and didn’t arrive until 10:09 the following morning. Having Tyson’s support was incredible. And the moments we shared when Abren arrived were so wonderful; I saw Tyson filled with so much love and excitement! It meant the world to me seeing him come to life the way he did. 🙂

Also, I want to share that the wonderful Greenwich Hospital staff went above and beyond to ensure everything went smoothly for us both. Here is a picture of Tyson and Abren together for the first time. Our nurse helped make this moment happen 🙂

Calvin came soon after the baby arrived and was so excited and very proud and protective. Here he is pushing his baby brother’s bassinet to my room from the nursery 🙂

And one more sweet photo of our little guys… 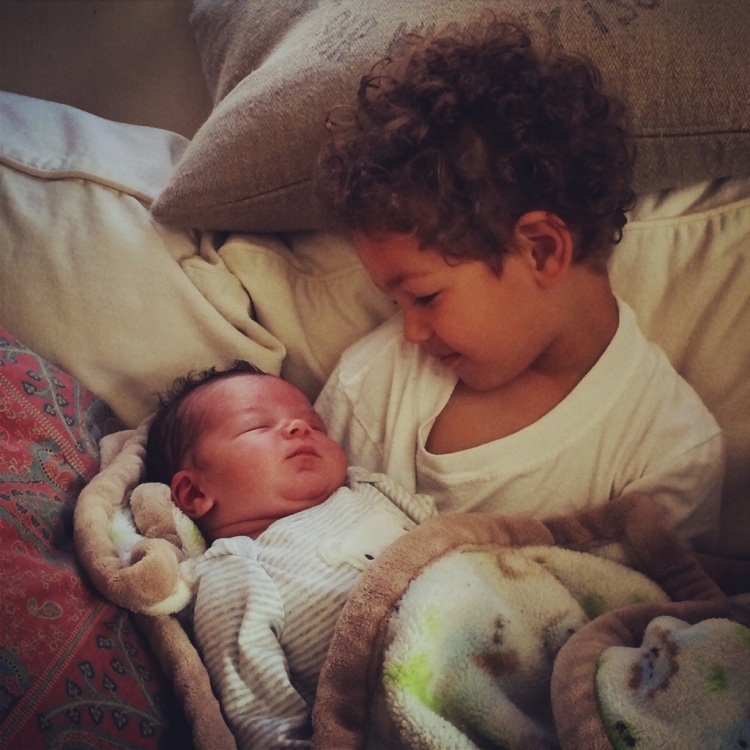 We are so grateful for our parents’ help with taking care of Tyson and Calvin while I was in the hospital and for the following two weeks at home while I recovered. ❤

So as I mentioned, the long night and following morning spent in anticipation of little Abren's arrival was very tiring and as a result, took a very large toll on Tyson's condition. In the days following, he had increased difficulty breathing and eating which forced us to rely more on the bi-pap machine and the feeding tube. He felt an exhaustion that didn't seem to subside, so we just made sure he got the rest he needed. This, and his loss of appetite were sparks of concern for us both as we were told by doctors that these two were possible signs of co2 levels rising. Naturally, this felt like a huge step back but we reminded ourselves of two things: 1) we were lucky to have these devices to help him breathe and receive his nourishment and 2) he was still SO much better than he was a few short months ago at Apollo Hospital. That said, we immediately made plans to send him back to Dr. Shroff.

And so, as I write this entry this afternoon, Tyson is fast asleep on the other side of the world in India at Nu-Tech with his parents near by. He arrived last Thursday (July 10) and is doing well. The flight was uneventful and he was even able to sleep this time. He had his bi-pap machine with him so that he would never feel discomfort breathing and I packed 4 cans of his feeding tube formula so that he wouldn't be hungry. Upon their arrival to the hospital, they were greeted with wonderful enthusiasm by the Nu-Tech family and got help settling in. Shortly thereafter, Tyson texted me to let me know he was okay and followed up w a FaceTime call. As you might imagine, I hardly sleep at all while Tyson's on the plane. I track his flight and do lots of praying. So, finally being able to see his smiling face was such an enormous relief! The sisters immediately began the stem cell treatment and gave him some IV fluids to help replenish his system and manage his jet lag. Dr. Shroff said she was happy with Tyson's current state and that one of her big goals for this trip was to get him weaned off the bi pap (or at the very least, begin the process). He was able to lie flat on his back for 2-3 mins the other day without the mask and that's a great improvement! Tyson also says he's gained weight since his arrival and has noticed a nice improvement in his core strength! They're having new braces made for him so he can start taking some steps soon. You might remember the full body braces he had in the very beginning, the rib cage piece connects to the legs and once he's strong enough again, they can be broken down to just leg braces. We didn't have the option to use his old braces bc Tyson lost so much weight while in Apollo for 4 weeks, they just wouldn't fit. So you can probably understand some of the frustration Tyson has…feeling like he has to start all over again. And in a sense, he does, but not all is lost. Those stem cells he received last year are still working hard and growing stronger. We just need to catch up to them 🙂

Tyson is there this time for 5 wks, returning August 14th. I'm thrilled to report that his attitude/frame of mind have truly been remarkable which is a testament to his strength. He's always smiling when we talk. I'm so proud. I'm convinced his biggest challenge is the mental aspect of this journey; staying the course and remaining focused on the present are what's crucial to his improvement and overall healing process. You know, at first glance (and as awful as this may sound), it's possible that even a joyous occasion such as the birth of our son could potentially be marred by this evil and disgusting Lyme that's paralyzed my husband, leaving him unable to hold or carry his son like a father should. But it's only given him MORE of a reason to stay strong. In my humble opinion, since witnessing his miraculous recovery back in March and April, I am truly not worried about him. If this man can bounce back from the state he was in…there is nothing he cannot do. ❤

And finally, I just want to say how grateful we are for his parents and the sacrifices they've made to be with him in my absence. Please pray for his continued strength and progress. I will be sure to share updates as they come in!

No matter how dark the moment, love and hope are always possible.
– George Chakiris